skip to main | skip to sidebar

The Central Rappahannock Chapter of the Virginia Master Naturalists has created a new web site
Click here for new site
The site will take over from this blog and will offer photos, newsletters,an email contact page and more. Please use the new site, as this blog will not continue to be updated. Thank you!
Posted by Central Rappahannock Chapter at 11:04 AM No comments:

Montpelier is hosting its seasonal woods walk on April, 7. It is a 2-hour walk through the oldest non-logged forest in the eastern US. Cost is $12 per person and the registration available on-line at https://www.montpelier.org/events/seasonal-woods-walk.
Posted by Central Rappahannock Chapter at 9:34 AM No comments:

Planning is underway for the 2022 basic training course. The training generally starts in late summer or early fall. Please check back with us later for more information.
Posted by Central Rappahannock Chapter at 2:53 PM No comments:

It was a cold and snowy weekend for the annual Great Backyard Bird Count. My counts were done with binoculars through the kitchen window so I could stay toasty. My husband (Mark) and I got into birdwatching last year with the pandemic so this is our first time attempting to do a birdcount. My husband removed the screen from the window so he could take pictures while I found new birds. I'd tell him what I found and give him directions to find the birds. Some of the birds we found were the Northern Flicker, Tufted Titmouse, sparrows (I think house sparrows but we later identified the white throated sparrow), Red Bellied Woodpeckers (both male and female), Downy Woodpecker, White-breasted Nuthatch, American Goldfinches (tons of them), Dark-eyed Junco, Common Grackle, Blue Jays, Northern Cardinals (several pairs of male and female), Carolina Chickadee, Mourning Doves, Carolina Wrens, and Red-Winged Blackbirds. We had a lot of fun doing the bird count together and plan to continue to hone our birdwatching skills and log bird sightings in the eBird app more frequently.
Posted by Central Rappahannock Chapter at 9:12 AM No comments:

Extension to Achieve Initial Certification for Basic Training Class of 2019

In the face of the pandemic and cancellation of many events to earn continuing education and volunteer hours, members of the Basic Training class of 2019 have had difficulty achieving initial certification. The VMN CRC Board has decided to extend the certification timeline for the class through December 31, 2021. Requirements for initial certification are 8 continuing education units and 40 volunteer hours. We are working hard to continue scheduling chapter events to make continuing education hours available through virtual events or small in person events until state restrictions are lifted. There are volunteer opportunities than can be achieved individually either at home or at local parks and trails. If you need ideas for volunteer hours please check the August 2020 newsletter or contact a board member.
Posted by Central Rappahannock Chapter at 5:53 PM No comments:

The 2020 Basic Training Class is being canceled due to the COVID 19 restrictions.  The Board will continue to monitor the situation and following guidance from the state may be able offer Basic Training during the spring semester.

Posted by Central Rappahannock Chapter at 3:32 PM No comments:


Searching for Sheds, in a recent Virginia Department of Game and Inland Fisheries magazine Virginia Wildlife, highlighted the time of year when White-tailed Deer (Odocoileus virginianus) shed their antlers and how individuals can walk through the forest on a shed hunt, to collect those shed antlers. Many of us have come upon antlers in the woods and just after reading this article, I was awarded with a find of a freshly shed antler while on a walk in the woods. I leave antlers where I found them as I understand they provide minerals for squirrels and other residents of the woods. 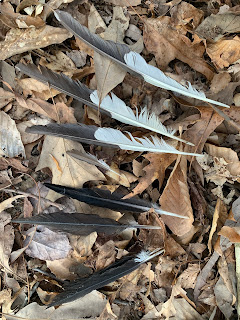 I began to think about other things found on the forest floor including turtle shells, bones, egg shells, and feathers. I realized that I have been feather hunting while in the forest, and I’m not the only one. Like many things on the internet, entire groups of enthusiasts find each other - some are devoted to found feathers.

My interest in feathers began when I photographed a feather and included that observation on iNaturalist. I used the taxonomic class Aves, since I couldn’t determine a species from a feather. I found informed professionals and amateurs in groups formed around feathers - https://www.inaturalist.org/projects/found-feathers. I have posted images of feathers that I am unsure to identify and have been helped by folks who really enjoy feather identification. Also, the Fish and Wildlife Service has a nice feather atlas - https://www.fws.gov/lab/featheratlas/.

Recently, while walking along the Dahlgren Rail Heritage Trail, I came upon feathers scattered about. I arranged them for one photograph. I was unsure what species produced these black and white feathers. I figured maybe a woodpecker from the colors but also, maybe they were from some sort of small water bird due to the marshy area nearby.

After posting on iNaturalist, I confirmed that these feathers were from a Pileated Woodpecker (Dryocopus pileatus).

After a taxonomic suggestion from a “bird person,” a “feather person,” or just someone smarter than me, identification becomes obvious, many times.

I leave feathers where I found them. On this occasion, I oriented feathers for a photograph but most times, they get photographed as they exist. The U.S. Federal Eagle Protection Act of 1940 and the Migratory Bird Treaty Act of 1918 seem to prohibit possession of many if not all feathers. I suspect the legal aspects are more nuanced but I follow, don’t collect feathers, just enjoy them where you find them.

Observing, identifying, and documenting feathers can be interesting, fun, and an easy activity. Feather awareness is just another layer of appreciation while on a walk outside.
Posted by Central Rappahannock Chapter at 8:35 AM No comments:

Chapter Officers and Board Members

Chapter Newsletters can be found here.

Every 3rd Tuesday at 7PM - Chapter meetings are held at the Fredericksburg Church of Christ, 226 Riverside Drive, Fredericksburg, VA.

Partners and Organizations of Interest